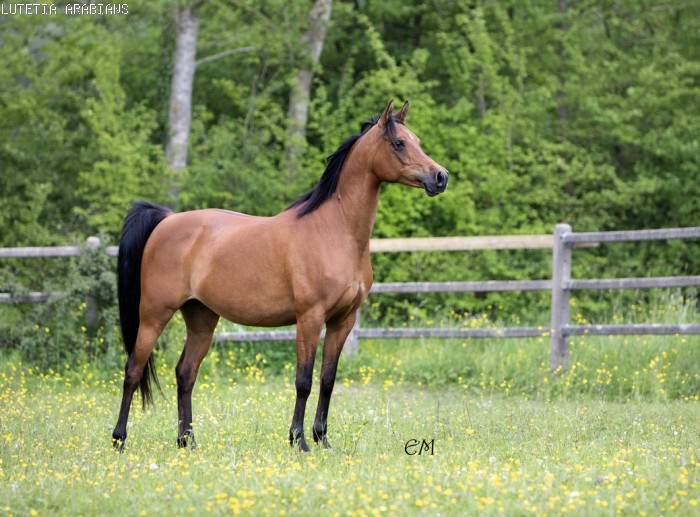 MARWISSA is a daughter of World Champion MARWAN AL SHAQAB (Gazal Al Shaqab x Little Liza Fame), the leading sire of show horses for the last decade. Marwan Al Shaqab is sired by World Champion GAZAL AL SHAQAB, a giant of the breed as the sire of not only Marwan but also the great daughters PIANISSIMA (out of Pianosa) and EMANDORIA (out of Emanda), considered by many as two of the most beautiful Arabian mares in the world. Marwan Al Shaqab´s dam LITTLE LIZA FAME was herself Champion in both halter and Western Pleasure and sired the son GW MAGNETIC BEY (by Huckleberry Bey) before she was sold to Al Shaqab in Qatar. GW Magnetic Bey is the sire of the mare JAS Silver Eyes+++/ (out of JAS Stella), Legion of Supreme Honor and Legion of Supreme Merit for her achievments as a Sport Horse.

GAA Millenia is a daughter of US National Champion MAGNUM PSYCHE (Padrons Psyche x A Fancy Miracle) and out of a daughter of BEY SHAH (Bey El Bey x Star Of Ofir). Her dam BEY CHERIE AMORE is out of MY CHERIE AMORE who carries the bloodlines of valuable Polish bloodlines like the stallions HAL GAZAL (Eleuzis x Bufa) and HARBIT (Negatiw x Harfa) and four lines to legendary WITEZ II (Ofir x Federacja) as well as old American breeding with her damline tracing down to Abeyah d.b. 1896, imported to USA in 1906 by H. Davenport.